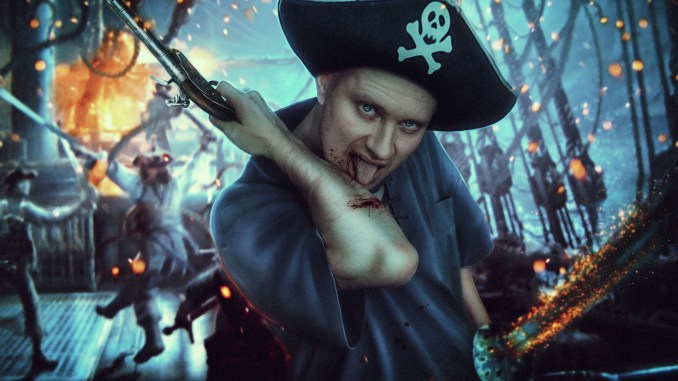 From their appearance in cherished literature, expensive motion pictures, adored children cartoons, epic anime series, and even noodlely religious practice, 18th century maritime pirates are a common myth. Who wouldn’t want to be one? You get to live on a sail ship, drinking alcohol day and night, chasing large sums of gold, free from rules and laws- in an era before the invention of radar technology, making your crew of friends almost unfindable on the open sea. It sure sounds like an amazing way to live, like a never ending cruise party.

Sadly the real lives of pirates were far from being as advertised. Pirate nerds, meet the history nerds. Pirates were the bad guys, in the real world; they plundered and killed, all the while living very miserably lives. Don’t go trading everything for a boat and a hat just yet!

Get in looser, we’re going pirating

Sailors perhaps aren’t given the credit they firstly and honorably deserve- sailing a tall ship is extremely difficult. Yet, after years of living where it’s cold, wet and lonely, acquiring knowledge, experience and muscle book learning cannot provide, most sailors working for navies or merchants were treated like dirt. They were pushed around by their employers, who were typically high-born and/or rich. The measly ‘honest’ pay sailors escaped each risky voyage with was practically designed to keep them working forever. Rebelling against authority was an attractive option- Fight for your Right to Paaaarrggty!

Pirates were seen as the impressive career of those who had survived sea voyages long enough to have taken after the ocean’s wild temperament. Being allowed to join a group of them, either by accident or initiation, was interesting. Captains were somewhat elected to their roles, instead of appointed according to military and social rank. As mutinies were laughably common, Captains treated pirate crews fairly well to remain in power. Piracy offered a chance to make a fortune, provided the journey didn’t end badly, and allowed sailors to arm themselves as they desired, something unseen on merchant ships.

What’s not to love? Everything

Not wanting to get arrested on land for their looting, a pirate is one who accepts banishment to the sea, an environment ill suited to human beings. With nowhere else to go, the entire world of a pirate is constrained to one ship, where every day life onboard is rather difficult.

Discipline is important, even if you’ve traded from a 3-masted ship down to a Sloop, work and maintenance is a round-the-clock effort. At sea, sailors are constantly working too clean, mend and maintain their embarkation- their lives depend on it. It gets a little hard to be diligent among pirates, however. Every man is his own, concerned about having fun more than anything, so not all tasks are kept up with. Grime gathers, equipment falls into disrepair, ‘workplace accidents’ become more common- and if the ship sinks, everyone dies.

The space below deck is cramped, smelly and full of vermin. Rats, huge and vicious, are numerous; they spread disease, eat through food stores, as well as the ship itself, the hull and canvas, as though they don’t realize the boat is essential to their survival. Pirates get plenty to eat, but they’d rather eat it in the dark to not see the weevils crawling on it. There were no rules, including about where a fellow pirate should go to the bathroom; the bottom levels of the ship eventually became imbibed with the slush and smell of excrement and sickness. Keeping things healthy and sanitary in an 18th century context is improbable, but it’s even worse when half of the crew is busy drinking.

There wasn’t much pride among pirates, they slept with an eye open even among themselves. There was no code of behavior, beyond the concept of not angering the wrong person to not end up overboard. There weren’t really any secret songs to whisper in the fog at dawn or anything ritualistic about pirate life, chaos ruled their actions. Fellows didn’t share much, except perhaps is dysentery, the illness that slowly ate their stomach’s inner walls as they pirated on.

At least the work was somewhat easy; the overpopulation onboard pirate ships meant less work was assigned to an individual, leaving them lots of time to sit around as they waited for passing ship. Raids were conducted with strategy, and depended entirely on whether a ship could be caught up with to begin with, which wasn’t as simple as portrayed in modern entertainment mediums.

Pay wasn’t distributed easily; seizing cargo meant pirates had access to interesting amounts of tobacco to smoke, large quantities of ale, and their food was served on very nice looking dishes, but ships not accidentally sunk were to be sold, and booty needed to be traded. Hunters that roamed the waters, looking to claim bounties, has to be avoided at all cost, sometimes stretching trips to dangerous lengths. It took time and effort for a regular pirate to see his coin.

Whether it’s from drowning, sickness, malnutrition, sword fighting, cannon, or being marooned on a deserted stretch of sand, real pirate stories didn’t end well. Death is an ever-present passenger aboard all pirate ships, and being isolated at sea means no one hears the news. The final days of many famous pirates are a mystery to us modern nerds, many seem to simply disappear, for lack of available record. Yet some do manage to escape their terrible fates. Some pirates are known to have retired from their plundering ways, either to somewhere warm, or by purchasing pardon from rulers, though these chances were very slim.

Pirates were criminals who claimed things illegally who lived violent and disorderly lies. Their travels weren’t as exciting and free as we’d like to imagine. They were not heroes as we have been led to believe through works of fiction; none of them cared to help locals, take down oppressive leaders, or share their fortunes. Pirates were the bad guys, the ones who threatened the real adventurers and defenders of the seas. Their lives were miserable and short, which perhaps explains their decision to drink themselves silly and seek risks.

Sorry pirate nerds, the history nerds didn’t mean to pop your bubble, but perhaps 18th Century Piracy ought to stay in literature, films and cartoons? What makes behaving like a “pirate” enjoyable, in this modern era, is the power of make-believe. Impossible things are, after all, the most fun!

All images displayed are in the public domain, C00 Creative Commons. Thank you to Pexels for the background image (https://pixabay.com/en/users/Pexels-2286921/)
%d bloggers like this: